Last Night with the Duke 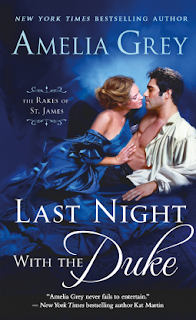 Could finding love be his greatest scandal of all?

The Duke of Griffin has never lived down his reputation as one of the Rakes of St. James. Now rumors are swirling around London that his twin sisters may bear the brunt of his past follies. Hiring a competent chaperone is the only thing Griffin has on his mind--until he meets the lovely and intriguing Miss Esmeralda Swift. In ways he could never have expected, she arouses more than just his curiosity.

Esmeralda Swift considered herself too sensible to ever fall for a scoundrel, but that was before she met the irresistibly seductive Duke of Griffin. His employment offer proves too tempting for her to resist. She can’t afford to be distracted by his devilish charms because the stakes are so high for his sisters’ debut Season. . .unless one of London’s most notorious rakes has had a change of heart and is ready to make Esmeralda his bride in Last Night with the Duke, the first novel in the brand-new Regency Rakes of St. James series by New York Times bestselling author Amelia Grey.

This book is the first in The Rakes of St. James. Which I have to say that this book is a good first showing in this series. In this story it was Esmeralda that was more of the ballsy one versus Griffin. He was more mild mannered. This was refreshing as it is usually the male that is the dominant one. To be honest, I don't know what type of reputation that Griffin had prior but he really was a sweetie. He did not deserve whatever bad rap he had prior.

Esmeralda was a breath of fresh air. She stirred things up in Griffin's life; what with her brazen attitude in not backing down when confronted by Griffin to her sister, Josephine, and the flirty banter between Esmeralda and Griffin. Speaking of Josephine, her innocence was great. She was not easily impressed by fancy things. The funniest moment was when she caused a big disturbance at the picnic lunch with the mammoth frog.

Than there are Griffin's twin sisters, Sara and Vera. They were both good in their own ways. Sara is a little more bold of the two. I understand that this was their first season so they did not have much life experience but after interacting with Esmeralda and Josephine, they came off as dull. Overall, I had a very enjoyable time reading this book. If you are a fan of historical romance than you should pick up a copy of this book.
Amelia Grey