The Adventures of Fawn 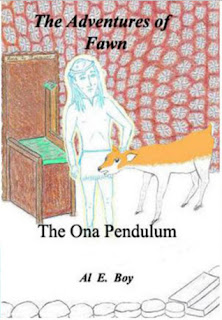 Fawn and her friends are off to the rescue! The Ona Pendulum...a magical device that keeps Santa, the elves, and even the reindeer going, even though they're hundreds of years old...is in danger of being destroyed. Time is of the essence as Fawn and company must first learn the real story of how Kris Kringle became Santa Claus, and then use that information to save the day! It's a grand adventure the whole family will love!

Fawn, Bunny, Snowboy, Santa, Wajic, and Doctor Mary Weather are all back. Readers were first introduced to them in the first book, The Adventures of Fawn: Til' the Last Snowflake Falls. I enjoyed that book a lot. Although, in the first book Santa and Wajic did not have as huge parts as they do in this book. I have enjoyed getting to know both of these characters better; especially getting to know the story behind just who Santa was before he became the man in the red suit. Wajic is another character that was fun to get to know. He had so many tricks and he was filled with many expressions. Not to be outdone, Mary got more involved as well. Another fun aspect to this book is the new characters. Which turned out to be new friends.

While, the first book mainly focused on the woods surrounding Santa's workshop, this story took readers to a new location and back in time. It was not all fun and games but had some more substance to the story. Yet, readers will enjoy this story just as much as they did the first book.
Al E. Boy