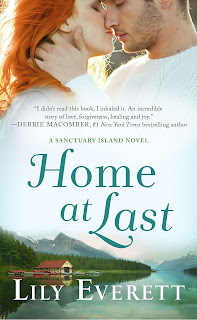 Home is where the heart is…

Marcus Beckett left Sanctuary Island after his mother’s funeral, and he hasn’t been back since. Until now. Needing a change from the high-risk, high-stakes life of a bodyguard, Marcus makes a solitary life for himself running the neighborhood bar in his hometown. His only mistake? Seducing and then dumping the town’s sweetheart, Quinn Harper. Marcus knows he did the right thing—a good girl like Quinn has no business with a broken man like him. But now no one will come to his bar, and he’s watching his last chance at a peaceful life go up in smoke. So when Quinn proposes a fake four-week courtship, he can’t refuse…even though he knows it’s a bad idea.

It’s a romantic charade that will buy Quinn time to distract her mother and father from their own marital problems—and will help Marcus welcome back some paying customers. But what begins as an engagement of convenience slowly transforms into a deeper connection, one that heals both of their hearts. . .and ignites the simmering passion between them. Could it be that pretending to be together is just what Quinn and Marcus needed to give their real love a second chance?


My Review
I briefly got to know Marcus and Quinn in Close to Home. I really liked them and could not wait to read their story. After finishing this book, their story is even better than I hoped.  I recently finished another book where the male lead had a nickname for the female lead. Marcus has one for Quinn as well. It is "Turbo". Knowing the meaning behind it makes it all that more enduring. Despite a 10 year age difference, it was not felt as Quinn and Marcus interacted with each other. In fact, I think it actually helped their relationship as Quinn was so much wiser beyond her young age. There was so many emotions captured in their relationship. Which I connected with them both as people and as a couple. Plus, their story showed that there is more to love than just sex.  While, this book was focused mainly on Quinn and Marcus; the other characters did not just sit by and play second string. Additionally, they had strong presence in this story as well and I enjoyed every one of them. I felt like I had come home with this book. Home at Last is a heart-warming read!

LILY EVERETT is the author of the Sanctuary Island series for St. Martin's Press. She grew up in a small town in the foothills of Virginia's Blue Ridge Mountains and now resides in Austin, Texas, where she writes full-time.