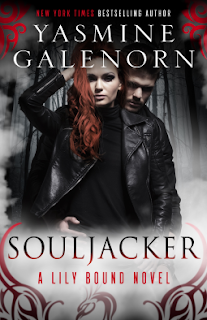 Lily O’Connell, a succubus, owns Lily Bound, an elite sex salon in the Blood Night District of Seattle. When a client is murdered in her house, a patch of skin missing from his chest, she knows there’s something evil afoot. Then comes the news that the Souljacker—a tattoo-artist-turned-vampire—has escaped from an institution for criminally deranged Supernaturals. And he’s hunting and killing everyone he has ever inked.

With one of the Souljacker’s tattoos on her thigh and nowhere else to turn, Lily hires Archer Desmond, a chaos demon and PI, to help her track down the vampire before he finds her and her friends. But Lily didn’t plan to fall for Archer. And as the old tales say—a succubus who falls in love will destroy the heart of the one she seeks to claim.

I am a fan and have been of this author's for a long time. When I saw that the author had this new series about a succubus, I got very excited. This book is very dark. I would classify this book as urban fantasy. It had sexual tension, sex, hot characters, murder, intrigue, and a strong female heroine. Ms. Galenorn has another winner on her hands with this book. This book is dark and edgy in all the right ways!

Not only is Lily a succubus and Archer, a chaos demon but one of Lily's friend's, Dani, is a witch. Lily's other friend, Nate is human but don't count him out. He can stand along side of everyone. One and Lily's client (dead) was a weretiger. Also, there is faes and the Souljacker is a vampire. So, there is a little bit of everything for everyone.

My only issue is that there was not a lot of interaction with the Souljacker until about the last third of the book. Learning about his story was interesting. He may be the bad guy but I do have a place for him. I look forward to reading the next book in this series.

Check out a copy on Netgalley until April 7th.
Yasmine Galenorn