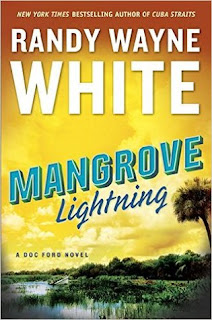 Doc Ford has been involved in many strange cases. This may be one of the strangest. A legendary charter captain and guide named Tootsie Barlow has come to him, muttering about a curse. The members of his extended family have suffered a bizarre series of attacks, and Barlow is convinced it has something to do with a multiple murder in 1925, in which his family had a shameful part.

Ford doesn’t believe in curses, but as he and his friend Tomlinson begin to investigate, following the trail of the attacks from Key Largo to Tallahassee, they, too, suffer a series of near-fatal mishaps. Is it really a curse? Or just a crime spree? The answer lies in solving a near-hundred-year-old murder . . . and probing the mind of a madman.

This is my first introduction to this series. At first I struggled with this book. In fact, after just a few chapters I thought about giving up on this book. Yet, I told myself to give it at least a few more chapters. I am glad that I did. There was potential in what I read but it was subtle. I think that had I had that established relationship with Doc Ford, I would have been more engaged in the story. Yet, he does seem to be an interesting character. Maybe in the future I might go back and start from the beginning.

Ok, so back to the book. There were like two storylines happening in this book. However, the one that somewhat got my attention was the one involving Mr. Bird. The mystery surrounding the hundred year old murder was docile. Now, if this book had been just about a madman terrorizing the islands of Florida than I would have been more engaged in the story. Because in those scenes the intensity was higher. I may not have loved this book but I did not hate it either.

Since leaving home at age 16, and skipping college in the process, New York Times best-selling author Randy Wayne White has been a farm hand, a brass and iron foundry worker, a telephone lineman, and, for thirteen years, a full-time fishing guide at Tarpon Bay Marina on Florida's Sanibel Island. He has been stabbed, "shot at with intent," and was in a hotel that got blown up by Shining Path Anarchists in Peru. As a columnist for Outside magazine he has covered the America's Cup races in Australia, gone dog sledding in Alaska, searched for wild orangutans on Borneo, brought back refugees from Cuba, been diving in the infamous Bad Blue Hole lake on the desolate Cat Island in the Bahamas, and even participated in a mission to steal back General Manuel Noriega's bar stools.
Mangrove Lightning is White's 24th Doc Ford book. He has also had four collections of his columns for Outside magazine and elsewhere published. In 2002, a one-hour documentary film called The Gift of the Game, about Randy's trip to Cuba to find the remnants of the Little League teams founded by Ernest Hemingway in the days before Castro, won the "Best of the Fest" award from the 2002 Woods Hole Film Festival, then was bought by PBS and broadcast station by station in the spring and summer of 2003.
He lives on Sanibel Island, Florida, where he was a light-tackle fishing guide for many years, and spends much of his free time windsurfing, playing baseball, and hanging out at Doc Ford's Rum Bar & Grille.
For more information visit his website at http://www.randywaynewhite.com, and connect with him on Facebook.