You Cannoli Die Once is an appetizing, entertaining book that will bring a smile to your face and laughter. 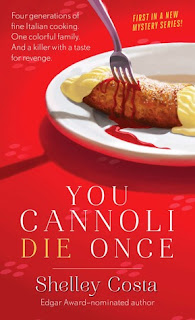 Eve Angelotta works at her family’s restaurant, Miracolo. She is the chef. However this does not mean she gets full control. She is constantly at odds with her grandmother, Maria Pia Angelotta. No matter how much Eve and her grandmother might argue she would never imagine her grandmother would have it in her to kill, especially her grandmother’s boyfriend.

You Cannoli Die Once is the first book in the Miracolo mystery series from author, Shelley Costa. I thought that this was a fun, good cozy mystery. I have a co-worker that is Italian and she is one of the nicest people I know. Having said this, I am glad that I don’t have to get familiar with the Italian side too much when they get upset or really animated while talking.

This is what I liked the most about this book was the Italian side of the characters. They kept things entertaining. As well as the other characters. They were eccentric. My only issue is that there were so many characters coming at me all at the same time and I was trying to get to know them so it was confusing to get them all straight in my head. Trying to figure out which ones are going to stay and which were just there for a brief appearance in this book. This series is a good start to what will be a fun series. You Cannoli Die Once is an appetizing, entertaining book that will bring a smile to your face and laughter.