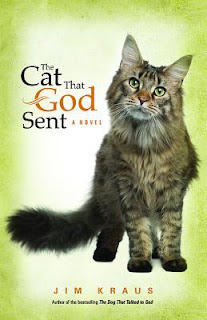 
Jake Wilkerson, a disillusioned young pastor who is an expert at hiding his fears, takes on a new assignment at a small rural church in Coudersport, Pennsylvania. It's a far piece from anywhere and full of curiously odd and eccentric people, including Emma Grainger, a single woman and a veterinarian who dismisses all Christians as "those people," and Tassy, a young runaway with a secret. His first day on the job, however, Jake is adopted by Petey - a cat of unknown origins and breed - but of great perception. Petey believes that he is on a mission from God to redeem Jake and bring him and his quirky friends back to the truth.


The Truth About Sleeping Cats

From the new book, The Cat That God Sent.(Of course, I’m the main character. I’m a cat. You think I would be a walk-on? Get serious. We’re talking a cat here. A Siberian cat, to boot. Of course the book is about me.)

They asked me to do a blog.

Actually, this whole thing is playing havoc with my sleep cycle. I heard the humans cackling once over a fact they read on the Internet. The fact that seemed to amuse themwas that cats, if left to their own devices, will sleep from 16 to 20 hours a day.

To be honest, that doesn’t sound like enough hours for me.

I love sleeping. We cats—being superior creatures and all, and possessing a whole slew of bones (many more than those boney and stiff dogs have)—well, we can sprawl out anywhere and everywhere with great feline élan. We are the true aficionados of relaxation. A cat can drape itself over an armrest in a hundred different ways—all of them more comfortable than the one before.

It is one of our greatest achievements.

To fully and totally be at ease, be at peace, be at rest.

We always sleep the sleep of the innocent—even if we are the most diabolical and mean-spirited cats in all the cat world.

We are the kings and queens of REM.

Our human companions should learn from us. I have tried to sleep with the human that shares my house. It is a very difficult task. He’s all twitchy and nervous, and gallumps between positions. You ever watch a cat change sleep positions? It is a thing of grace, of beauty, of pure Balanchineballet style.

If you humans want to be at rest, at peace, asleep, perchance to dream—watch how a cat does it. Their entire heart and soul are poured into making sleep a divine, celestial experience.

Learn how to drape, relax, become boneless and become one with the deep mysteries of sleep. Watch a cat and learn.

The mystical is not how the world is, but that it is.

Jim Kraus is a longtime writer and editor who has authored or co-authored more than 20 books, both fiction and nonfiction. His best-selling humor book, Bloopers, Blunders, Jokes, Quips, and Quotes, was published by Tyndale House Publishers, sold more than 40,000 copies and inspired several spin-off books. Jim, and his wife, novelist Terri Kraus, and one son, live in the Chicago area.

Also residing with them is a sweet and gentle miniature schnauzer named Rufus. Coincidently, Rufus is also the name of the dog in Jim's recent book, The Dog That Talked to God. "What a coincidence," Jim said. "What are the odds of that happening?" They also share space with an ill-tempered Siberian cat named Petey. Coincidently, Petey is the name of the cat in Jim’s most current book, The Cat That God Sent, by Abingdon Press.

Jim recently was awarded a Master of Writing Arts degree from DePaul University. "Now, I am able to write more better," Jim said. (Yes, that is supposed to be humorous.)

Passionate about writing, Jim loves to create true-to-life characters. "I tend to be the one at the party that is on the edge of things--observing how folks act and react. Plus, I'm not that crazy about people in general--so it works out fine." (Again, it's supposed to be funny.)


Purchase a copy on Amazon and Barnes and Noble