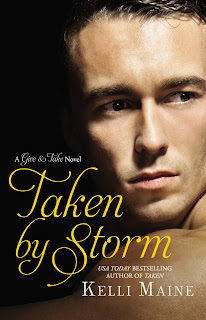 Maddie runs back home. Before she can accept her fiancé’s marriage proposal she must clear the air between her and MJ. Maddie and MJ used to be in love.


From the moment that MJ sees Maddie again he is awash with emotions. It is a love/hate relationship. She broke his heart. However he can not deny how much he loves her, especially when he learns that she is engaged. MJ plans to show Maddie just how much he is the right man for her.

Taken by Storm is book two of the Give and Take novels. This book can be read as a stand alone novel. However there are some characters and their story that interact in this book that appeared in book one, Taken. Again though readers will be able to quickly piece together all of the events from book one.

Because I have not read book one, I can not say if having not read that book would have helped me any in liking this book better. I really had a hard time reading this book. I tried to stick with this book as long as I could but eventually had to put it down. I was not feeling the characters. I was pulling for Maddie and MJ but found them both to act kind of childish and moody. This was off putting. This is not a good thing when the two main characters are supposed to be featured in a romance. Which I could tell that they did love each other but their past left them kind of bitter towards each other. I did flash forward a ways just to see how the romance between Maddie and MJ was and it was hot.


Tentatively, Rachael approached Merrick and put a hand on his shoulder, urging him forward. Maddie took her cue and squeezed MJ’s leg again. “You have to get out,” she whispered.

He inhaled sharply and blinked a few times, coming out of whatever thoughts were spinning through his mind.

Slipping one leg out, then the other, he stood tall and strode forward, no hesitation in his step. Times like these, Maddie was thankful for his over-inflated ego that took over. He knew how to handle himself and could flip the all-business side of himself on in an instant, drowning what he was thinking and feeling in the dark depths of his eyes.

Maddie got out of the cart and stood beside it. She’d never been so grateful for anything in her life. After all these years, he was here—MJ’s dad was here and they were face-to-face—and she got to be part of it.

She blinked back the wetness in her eyes as a familiar warm band of emotion—she could name if she let herself—wrapped around her heart.

Merrick, with the sleeves of his white oxford shirt rolled up and the top couple buttons undone, stopped in front of MJ and studied his face with the most amazed and stricken expression Maddie had ever seen on a person. “You’re MJ,” he said.

“I’m MJ.” MJ stood tall in front of his father, though an inch or two shorter. His arms hung at his sides, his chin stiff and tilted up as Merrick took him in.

“I’m…” Merrick glanced over his shoulder to Rachael. She smiled, encouraging him.

“Merrick,” MJ said, lifting the tension. Neither of them wanted to use the “D” word.

“It’s nice to finally meet you,” Merrick said, holding out his hand to shake his son’s. “I’m sorry it took so long, but I didn’t know you existed.”

I have 1 copy to giveaway. US only. Contest ends May 16th. Just leave a comment with your email address.

Jane said…
I haven't read the first book either, but if it's a stand alone I hope I don't have a hard time following the characters and story.