Up for grabs is all 4 books. US Only. Ends tomorrow, Monday night. Leave a comment with your email address as to whihc if all books you want to win.

A father for ten years, a mother for eight, and for a time in between, neither, or both ("the parental version of the schnoodle, or the cockapoo"), Jennifer Finney Boylan has seen parenthood from both sides of the gender divide. When her two children were young, Boylan came out as transgender, and as Jenny transitioned from a man to a woman and from a father to a mother, her family faced unique challenges and questions. In this thoughtful, tear-jerking, hilarious memoir, Jenny asks what it means to be a father, or a mother, and to what extent gender shades our experiences as parents. "It is my hope," she writes, "that having a father who became a woman in turn helped my sons become better men."


Through both her own story and incredibly insightful interviews with others, including Richard Russo, Edward Albee, Ann Beattie, Augusten Burroughs, Susan Minot, Trey Ellis, Timothy Kreider, and more, Jenny examines relationships with fathers and mothers, people's memories of the children they were and the parents they became, and the many different ways a family can be. Followed by an Afterword by Anna Quindlen that includes Jenny and her wife discussing the challenges they've faced and the love they share, Stuck in the Middle with You is a brilliant meditation on raising – and on being – a child.” To connect with Boylan, you can follow her on Twitter @JennyBoylan.

The provocative bestseller She’s Not There: A Life in Two Genders also by Jennifer Finney Boylan (the tenth anniversary edition on sale April 30, 2013) is the winning, utterly surprising story of a person changing genders. By turns hilarious and deeply moving, Jennifer Finney Boylan explores the territory that lies between men and women, examines changing friendships, and rejoices in the redeeming power of family. Told in Boylan’s fresh voice, She’s Not There is about a person bearing and finally revealing a complex secret. As James evolves into Jennifer in scenes that are by turns tender, startling, and witty, a marvelously human perspective emerges on issues of love, sex, and the fascinating relationship between our physical and intuitive selves. Now with a new epilogue from the author and an afterword from Deirdre "Grace" Boylan, She’s Not There shines a light on the often confounding process of accepting ourselves.

“She’s Not There, the Running with Scissors of sex-change stories, brings irreverence and a merrily outrageous sense of humor to this potentially serious business.” —Janet Maslin, New York Times

Deep in the jungle where the borders of Vietnam meet those of Laos and Cambodia is a region known as "the lost world." Large mammals never seen before by Western science have popped up frequently in these mountains in the last decade, including a half-goat/half-ox, a deer that barks, and a close relative of the nearly extinct Javan rhino. In an age when scientists are excited by discovering a new kind of tube worm, the thought of finding and naming a new large terrestrial mammal is astonishing, and wildlife biologists from all over the world are flocking to this dangerous region. The result is a race between preservation and destruction. Containing research gathered from famous biologists, conservationists, indigenous peoples, former POWs, ex-Viet Cong, and the first U.S. ambassador to Vietnam since the war's end, Gold Rush in the Jungle goes deep into the valleys, hills, and hollows of Vietnam to explore the research, the international trade in endangered species, the lingering effects of Agent Orange, and the effort of a handful of biologists to save the world's rarest animals. 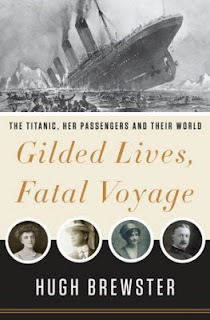 In Gilded Lives, Fatal Voyage: The Titanic’s First-Class Passengers and Their World, (in paperback March 26, 2013) historian Hugh Brewster seamlessly interweaves personal narratives of the lost liner’s most fascinating people with a haunting account of the fateful maiden crossing. Employing scrupulous research and featuring 100 rarely seen photographs, he accurately depicts the ship’s brief life and tragic denouement and presents compelling, memorable portraits of her most notable passengers: millionaires John Jacob Astor and Benjamin Guggenheim; President Taft's closest aide, Major Archibald Butt; writer Helen Churchill Candee; the artist Frank Millet; movie actress Dorothy Gibson; the celebrated couturiere Lady Duff Gordon; aristocrat Noelle, the Countess of Rothes; and a host of other travelers. Through them, we gain insight into the arts, politics, culture, and sexual mores of a world both distant and near to our own. And with them, we gather on the Titanic’s sloping deck on that cold, starlit night and observe their all-too-human reactions as the disaster unfolds. More than ever, we ask ourselves, “What would we have done?” Today is the 101st anniversary of the sinking of the Titanic and this book is a fresh perspective on the event and the people aboard.

traveler said…
Thanks for this great giveaway. All are wonderful. saubleb(at)gmail(dot)com
May 19, 2013 at 7:15 PM

petite said…
What a great selection of books. many thanks for this chance. elliotbencan(at)hotmail(dot)com
May 19, 2013 at 7:25 PM

petite said…
Sorry forgot to mention that Gilded Lives interests me the most. thanks so much. elliotbencan(at)hotmail(dot)com
May 20, 2013 at 8:13 AM