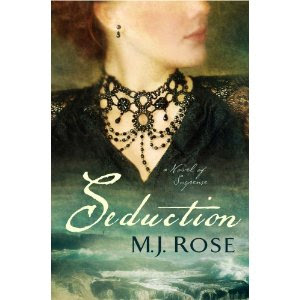 After hearing of his daughter’s death, Victor Hugo starts communicating with the dead. Hoping to bring him closer to his daughter. However the dead are not just satisfied with talking. They want more. Particularly one known as the Shadow of the Sepulcher.


Jac is contacted by a friend. Her friend has found some Celtic ruins. Jac travels to the Isle of Jersey. There Jac uncovers the secret behind who the Shadow of the Sepulcher was and what he wanted with Victor.

One thing that I can always count on with M.J. Rose is her storytelling. She makes all of her characters and their stories come alive. She is like one of the only authors that I can think of that can find that great balance between the past and the present. Usually I am drawn more to the past tense then the present.

The way that Victor became obsessed with communicating with the spirits was creepy. It was almost like I could feel the air change in the room and hear the howl of the phantom dog. I was seduced by Seduction.
M. J. Rose