This series needs to be made into either a movie on the big screen or a television series. It is that good. 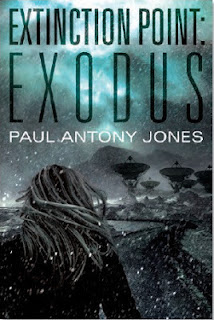 Emily Baxter is a reporter or she used to be until the alien invasion turned the skies blood red. Emily knows she is not the only survivor. She has been communicating with another survivor named Jacob in Alaska. It seems that the aliens can not survive the frigid, cold temperatures. She is trying to make her way to him. Along the way Emily along with her dog, Thor find a family. Emily and the family must trek their way across dangerous territories all the while trying to survive the aliens.


Extinction Point: Exodus is the second Extinction Point book. The first titled Extinction Point. I was not aware when I first picked up this book that this was book two. Luckily this book can be read as a stand alone novel. This series needs to be made into either a movie on the big screen or a television series. It is that good.

I have not read many alien themed books however I am a fan of the sci-fi and horror genre. This book was an instant love. The world that Mr. Jones built along with the characters and the aliens is what made this book for me. I can tell you that I would never want to meet any of these aliens or at least not alone.

Emily is one tough cookie. She kept a level head throughout the whole ordeal. The ending left me with more questions. Like what is going to happen next, will anyone be able to stop the alien invasion, and what about the crew of the International space station?