Children of the Underground 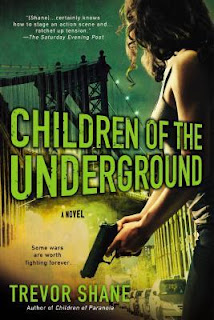 In the first book Maria’s boyfriend, Joe was killed and their son, Christopher taken. Christopher was taken so that he could fight for the other side. Maria will do everything in her powers to get Christopher back.


First she will need some help. She tracks down Michael, a friend of Joe’s that is fighting in the war.

I got to know more about the each side and why and what they were fighting for. Maria became a front runner in this book. She was strong and became a fighter. I have a warning “ Don’t mess with a mother and her child.” The excitement level was high however it did start out a little slow for me. Some of this might have had to do with I had to re-familiarize myself with this series. I read the short sneak peek to the third book, Children of the Uprising and I have to say I can not wait to read about Christopher.