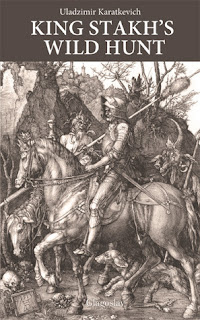 Andrey Belaretsky gets caught in a rain storm. His carriage takes him to the castle of Marsh Firs. There Andrey meets Nadzeya Yanovsky. It seems that Nadzeya is being stalked by sinister phantoms that go on a hunt at night. Andrey decides to stay and help Nadzeya. Andrey gets an up close and personal look at the Wild King’s Hunt.


I am a little embarrassed to admit that I have never heard of Uladzimir or that this book was made into a movie. This book is not something that I would typically read but I decided to give it a chance.

To be perfectly honest. I did find it different in an odd, good way. However I was not feeling it in the beginning and put the book down and gave up on it. It was only after I read some of the other reviews on this book that I decided to give it another chance. The book did get better once I was into it a while. The Wild King’s Hunt party is one scary hunting party. I sure would not want to be the hunted. This book is character driven and is very descriptive which really helped.