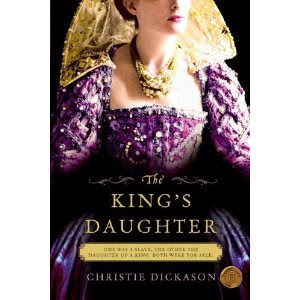 The King's Daughter is the story of Princess Elizabeth. Growing up, Elizabeth knew she may not be the prettiest but that that did not matter as she was known as the King's daughter. She could guarantee that she would be married to whomever her father wished upon her. Every time that Elizabeth was seen to prospects she always felt like she was at a cattle drive. Elizabeth knew she had to please her father but Elizabeth is smart and has ideas of her own. When Elizabeth meets the German Prince, Frederick of Bohemia, she feels a connection with him despite him being a Protestant. Unfortunately, when the King changes his mind about marrying Elizabeth to Frederick, she must decide what she really wants for her future.

Mrs. Dickason did a wonderful job telling the story of Princess Elizabeth in The King's Daughter. I have read many books about Elizabeth and what I find about the other books is that they don't fully focus on Elizabeth or that they insert sexual innuendos. Don't get me wrong as I am not a prude but there is a time and pace for certain elements in books. While there was some sex, it did not take away from the story. It was nice to really get to know Elizabeth and to experience things through her eyes. It is not easy being the King's daughter. I knew women back than did not have much say in anything but to actually hear Elizabeth's thoughts voiced on this was nice. It was easy to see why Elizabeth became a good Queen. She was very observant and learned what traits she did not like in people and vowed to not to be like them. Mrs. Dickason explains that she tried to stay as accurate to historical facts as she could. I thought that she did a good job with this and her research. In The King's Daughter the only things you will find is great story telling and intriguing and engaging characters which equals a book that you will want to treasure forever.
Christie Dickason