If you are looking for a jewel of a book than pick up a copy of Thieves Like Us! 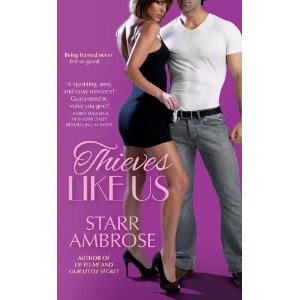 Janet Aims is ready to start a brand new life. She already has a new shorter hair do. The last thing Janet has on her list in order to complete rid her of her ex-husband, Banner Westfield or the Westfields is to sell off all the jewelry Banner gave her.

Janet sells her jewelry and makes off like a bandit. She got more money than she thought she would. Unfortunately, Janet’s enthusiasm is short lived. The authorities want to talk to Janet about the jewelry she sold. It seems that the necklace Janet sold is part of the Pellinni Jewels. Someone stole the whole collection. Janet is in some hot water. There is only one person who can help Janet…ex-con and professional jewel thief, Rocky Hernandez.

This book has intrigue and sizzling romance. Janet may have married into wealth but she is not a snob. Janet could handle herself in tough situations. Rocky is easy on the eyes. It is easy to see why Janet could fall for the bad guy.

Thieves Like Us does find perfectly into the category of romantic suspense. A lot of the books I read in this genre some times tend to go more on the romantic side or the suspense side but usually they don’t find the perfect balance between the two. Unlike this book that did just that. Starr Ambrose is a star in my book. I plan to go back and check out all the rest of Mrs. Ambrose’s books. If you are looking for a jewel of a book than pick up a copy of Thieves Like Us!
Starr Ambrose