Fans of this series will be pleased with 2031: The Singularity Pogrom. 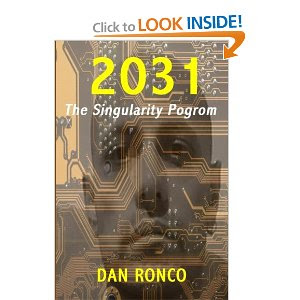 The year is 2025. It has been thirteen years since; Ray Brown attempted to stop Dianne Morgan and the computer virus, Peacemaker. Ray was unsuccessful and therefore is paying for it. Dianne sent Ray to a fairly secluded island. The only other person on the island is a man named Paul Martino. The first inhabitants to arrive on the island are androids and guards out to eliminate Ray and Paul. Luck is on their side. Ray and Paul are rescued by an African warlord by the name of Nkumah. Nkumah wants Ray to help him stop Dianne once and for all. Will Ray finally be able to stop Dianne and be reunited with his family or will he die trying?

I was cheering for Ray the whole time. Ray had so much personality and he is someone you can get behind. I like the element of suspense. You never truly knew if the good guys were really good or bad guys. There is lots of action taking place in this story.

There is no current technological futuristic sci-fi series out that I am familiar with that is as good as these books. Fans of this series will be pleased with 2031: The Singularity Pogrom.
Dan Ronco