A Half-Made World is better than I could imagine it to be. 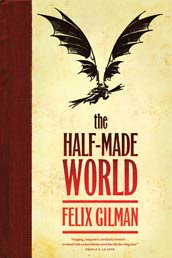 Thirty years ago, The General built the Red Valley Republic. At this time the world was lush with trees and grass. The world was evolving. Flash forward to present day. The world is desolate…thanks to the battle between the Lines and the rebel Guns. The Lines are focused on industry and spreading it across the world as quickly as possible. The Guns are the bandits of the world. They fight not with words but with weapons and violence.

Liv Alverhuysen is a doctor of Psychology. Dr. Alverhuysen receives a letter addressed to her late husband from Mr. Howell. Mr. Howell is the director of the House Dolorous. Mr. Howell wants Liv’s husband to come out West and share his teachings with the world. Liv is in need of some adventure and packs her bags and travels West.

John Creedmoor is an Agent of the Gun. The General has a secret locked away in his mind. A secret that who ever possess this knowledge will gain ultimate power. John wants this power for himself. He is a loner and likes it this way. While aboard the steam ship John meets Doctor Alverhuysen. John must make a choice…protect Liv or watch out for himself.

The Half-Made World is the first book I have read by Mr. Gilman. After reading this book, I now have Felix Gilman on my radar and plan to read more of his work. This book is a mixture of sci-fi and a Western. I absolutely fell for this book.

A good pairing by Liv and John. Liv is stable minded, whereas, John is balls to the wall guns a flaring. I would want to be a loner like John. Neither the Lines or Guns would be ideal to join up with. They each had their flaws. I must admit though that there were a few times when I did wish that the story line would more faster. Overall, A Half-Made World is better than I could imagine it to be.
Felix Gilman