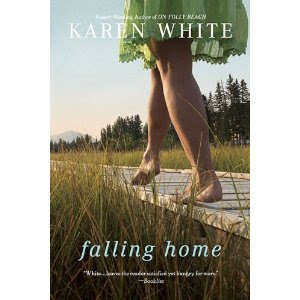 Cassie Madison was awaken by the ringing of the telephone. Nothing good comes from a ringing phone in the middle of the night. Cassie answers the phone to hear her estranged sister, Harriet’s voice. Harriet informs Cassie that their father had a heart attack and he is dying. Their father wants both of his girls home.

Cassie has not been back home in a very long time. It is almost too painful for Cassie to consider the though of coming home as Harriet married Cassie’s boyfriend, Joe. Cassie is an aunt. Every time Cassie hears about the birth of another of Harriet and Joe’s children, it is like someone is ripping open old wounds that Cassie would like to keep closed.

Sam Parker, an old blast from the past appears back in Cassie’s life. Cassie must make a choice between her boyfriend back home or Sam.

Falling Home is an excellent book filled with love, loss, and engaging characters. You will want to pick up this book to read it over and over again. Karen White is a great storyteller. I thought that I would not like Joe and Harriet but I fell in love with them. Joe is a nice guy and good father. He really loves Harriet. I like that Cassie and Harriet were able to bond with each other. Nothing is thicker then blood between family. Sam transformed from a nerd to a hunk. In the famous words of Dorothy from the Wizard of Oz…there is no place like home.

FALLING HOME was originally published in 2002, and is being released again in November 2010 in response to the many readers who reached out after unsuccessfully searching for the out-of-print novel. It has been extensively revised for this new publication. “Readers told me they loved the story and characters, so it was hard to see what I might change,” says Karen regarding the revisions. “Then it clicked. I didn’t want to change the story. I wanted to change some of the writing—to take the experience and education of having written nine other novels and to work at creating a better book.”
Karen White