Watch for the Second Coming! 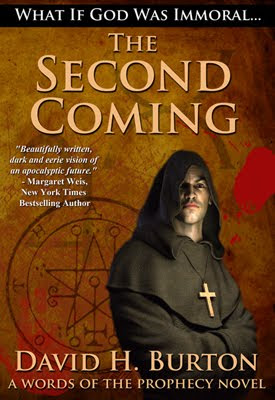 Review by Nancy (my fellow book reviewer and friend)

This tale begins with our meeting Paine and Lya, twins but having different fathers. If that disturbs you, best stop now for they may be some of the calmer folks you will meet on this journey. After an apocalyptic event, the world has been taken over by Witch Hunters - a dark group who will use any excuse to capture, torture and possibly turn anyone they suspect of witchery into on of them.

To control the Hunters, they are given wormwood. A very addictive herb that allows they to become nearly automatons for their cause. Lya is one of their supreme reasons for existence. She is the witch they want and they will stop at nothing to get her. Paine, the quiet one, follows along, lusting after anyone he meets but loving Lya more than may be healthy. They come across Diarmuid and his wolfen companion, Fang; who take them along on a journey back to the safety of Haven. They have no idea that Haven is no more, burned to the ground by demons and other nameless things. When Lya is captured, many go in search of her but will they get to her in time? Ah, that is the issue......

This story was a hard one for me. I liked the premise and tried really hard to like the plot but I kept thinking I was reading either a prequel or a sequel. Things were referred to that made no sense - I kept waiting for a reference to things that had happened prior but it never came. Other reviews of this tale seem promising so possibly I just didn't "get" it. I hope so.