The Cries of Vampira will have you howling. 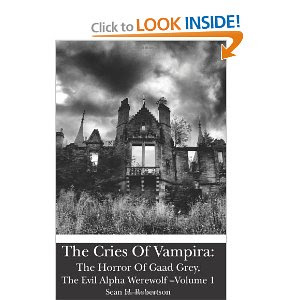 While out riding, King George and his brother, Prince Shannon is ambushed by Gaal Grey and his pack of Grey Wolves. The Vampirian and the Wolves have been bitter enemies for centuries. Gaal and his wife are killed. The rest of the Grey Wolves retreat. A lone figure named Loki approaches Gaad and takes him away from the bloody scene.

Gaal and his wife are killed. The rest of the Grey Wolves retreat. A lone figure named Loki approaches Gaad and takes him away from the bloody scene. Years later, Gaad is grown up. In this time, Gaad’s thirst for revenge has gotten worse.

Princess Kristin and Princess Kylie want the war between the vampirians and the wolves to end. The only way to do so is to destroy Gaad. It seems that Prince Kolbe is more interested in being the rogue playboy than what is happening between the wolves and his people. Can anyone stop Gaad?

The Cries of Vampira: The Horror of Gaad Grey, The Evil Alpha Werewolf-Volume 1 is dark and gruesome. Warning to those who are weak in the stomach. There is violent decapitation and a rape. This did not bother me as it was part of the story and it showed just how evil Gaad Gray was. I did think that this story was a bit lopsided, where the vampires were concerned. Gaad and his wolves dominated in the story. They did most of the killing. They may the vampires look like the weaker beings. I hope to see the vampirians make more of an appearance in the nest book. The Cries of Vampira will have you howling.

From the author:
Ten percent of my author royalties for this book will be cheerfully given to the National Suicide Prevention Lifeline, which is especially helpful during this time after the rash of teen suicides recently in our great nation. Have a great day and much success to you.
Sean H. Robertson