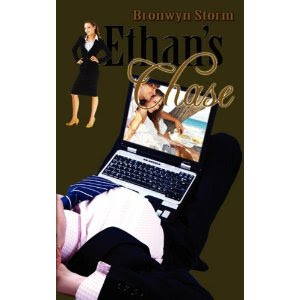 Ethan Phillips is the owner of Phillips Advertising. He is in need of having his systems updated. Ethan has spent all of his life avoiding commitment. Ethan enjoys being a bachelor.

Chastity ‘Chase” Logan works as a computer programming consultant. Chase receives an offer she can not refuse. One of the programmers at Philips Advertising tells Chase that they need a new upgrade and to come put her bid in for the job.

Much to Ethan’s surprise, the new programmer is a woman. Not just any woman but Chase. Ever since Chase spilled her coffee all over Ethan, he has not been able to stop thinking about her. Will Ethan commit to Chase or take off running in the opposite direction as fast as he can?

There were so many great moments in this book that I can’t name them all. There were a few though that that really had me smiling and laughing. There was the moment when Chase bumped into Ethan with her coffee and was speaking to him in French. The only two phases she knew were…”Do you speak English” and “Do you want to sleep with me?” My other favorite scene was when Chase was at the vending machine sweet talking it into dropping her chocolate brownie and Ethan walked up behind her.

Ethan and Chase had some sizzling chemistry between them. Ethan is easy on the eyes and looks good out of a suit as he does in one. Ethan’s Chase is a sexy, fun, quick read. This book makes me want to give chase of my own and check out more books by Mrs. Storm.
Bronwyn Storm