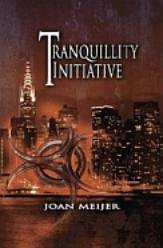 The Tranquillity Initiative is a medical thriller about an anthrax attack on New York City. It is a book that is so in tune with current events that author Joan Meijer had to rewrite significant parts of it as the present kept catching up and passing her fiction.

Starting with a President who is caught in an unpopular war during a re-election campaign, the action of this story moves the reader through authorization of the use of illegal anthrax weaponry on another country, weapons stolen from our overseas bases and returned to the United States through a customs that was not warned about the danger because of the fear that the Administration might be found to have engaged in illegal use of germ warfare. As Bob Woodward discussed in Obama's Wars, the military has taken over this Administration and tactics that were frowned upon overseas have come back to haunt us.

Two bombs are smuggled into New York City. One is opened and, when no explosives are found inside them, the terrorists make the connection to a debilitating outbreak of pulmonary anthrax that has brought their home country Astrakhan to its knees. They release the contents of the bomb into Times Square precipitating an outbreak of this rare disease in the thousands.

In the remainder of the story Doctor Cassandra Williams and Senator Richland Powell, Junior Senator from New York work to identify the epicenter of the epidemic that has struck the city in order to find clues that can identify where it was released so they can stop the aerial deployment of the second bomb from one of New York's historic skyscrapers. That release would bring New York to its knees, resulting in the deaths of millions and the mayhem that would follow. Even as Williams and Powell struggle to locate and stop the terrorists, a cadre of ex-military attempt to kill Cassandra, and her anthrax specialist father Doctor Stuart Williams, in order to prevent them from identifying the bacilli as made in America and bringing down the Administration which is their power base.

The Tranquillity Initiative by Joan Meijer

Joan Meijer is the co-author with Suzy Prudden of the best selling "MetaFitness: Your Thoughts Taking Shape" and 15 other books including "Date Rape: It's Not Your Fault."

The Tranquillity Initiative is her second novel. She lives with her family in Palmdale, California.


Note: Review copies of this book are available by replying to ops@bostickcommunications.com. Please include your mailing address.