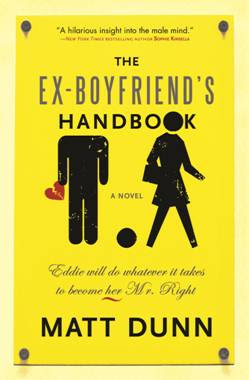 Edward Middleton comes home to find his girlfriend, Jane has left him. Jane and Edward have been a couple for ten years. As if things couldn’t be worse, Jane not only left Edward but left the country. Jane went to Tibet. Though she did leave Edward a note. She told him that “You’ve let yourself go, So I’m letting you go. She left it on his scale and told him to use it for more than just stacking newspapers.

Edward has three months before Jane returns. Edward’s good friend, Dan tells Edward that he needs to get his act together. This is funny as Dan is a womanizer. Edward agrees. When Edward sees an ad for a “New You” advertising that Sam Smith can help get you in shape and transform into a new you. Edward calls. To his surprise Sam is really Samantha. Can Sam help Edward win Jane back?

Mr. Dunn brings the fun…in funny. This book had me laughing and wanting to share this book with my friends. In fact my boss made a comment about the title of this book and right away I had to tell her about a hilarious moment I had just read involving Edward. The first humorous moment was when Edward got up the next morning after working out for the first time. The comments he made had me smiling for a long time. The other moment I liked was when Sam was commanding Edward to run up and down stairs. At the end of their workout, with Edward about on his death bed, Sam tells him good job. Edward says good job why. Sam replies “Well you didn’t puke, fall down the stairs or puke and fall down the stairs at the same time”. I laughed and laughed. I could just imagine what Edward was thinking at that moment in time…he was thinking “If I could I would reach up and slap you silly”. There are many more comical scenes like these to be found in The Ex-Boyfriend’s Handbook. Mr. Dunn won me over with this book.

Matt Dunn has written about life, love, and relationships for the Times, Guardian, The Sun, and a number of magazines, including Company, Cosmopolitan, Elle, Glamour, and Scarlet.

Previously Matt worked as a professional lifeguard, fitness-equipment salesman, and an I.T. headhunter, where his success in rewriting other people’s resumes made him think he might have a talent for fiction.

He divides his time between London and Spain , plays a lot of tennis, and is hard at work on his sixth novel.