The End of Marking Time 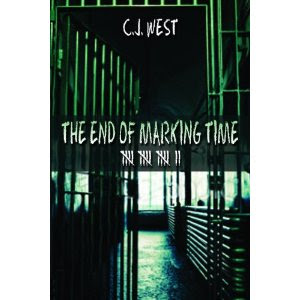 Michael O’Connell has lived a life of crime. We are not talking just petty crime but the big time crime that comes with a heavy penalty. After one of his latest jobs, Michael is arrested. He has been set up. What Michael learns while he is being processed is that he broke into the home of a District Attorney.

Michael is found guilty and sentenced to five years in prison. While being transported to MCI Cedar Junction, Michael is hit by a stray bullet during a break out. Michael awakes up to find that the world has changed in a big way. Shortly after Michael was sentenced, the Supreme Court decided that incarnation was too inhumane. This resulted in millions of inmates being released back into the real world. Inmates are roaming free with no fear. If they mess up they are re-educated but not imprisoned. Will the world ever be safe again?

The End of Marking Time is the first book I have read by CJ West. I must admit that the first third of this book, I was not really feeling it. It felt like I had started at the middle. Once, I got to the part after Michael woke up, is when the story picked up for me. The main character, Michael, is the narrator. He tells the story in the first person. It took me until one of the characters in the book addressed Michael by his name for me to realize who was doing the talking.

I read many other reviews of this book and one person said this was like sci-fi. To me I didn’t agree. I felt like what was happening in this book could become a reality, which upped the intensity levels. Though, I did not love this book, I would be willing to give Mr. West another try.
CJ West

CJ West said…
Thanks for reading my work Cheryl.

I agree that this isn't sci-fi. I wrote THE END OF MARKING TIME as a traditional thriller. Although it is set in the near future, nothing in the book is impossible today. I'm glad you made that connection and that the work resonated for you.

Hopefully you'll enjoy my next book even more.