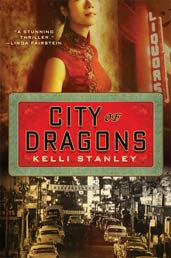 Private investigator Miranda Corbie is attending the Rice Bowl in Chinatown. It is an event that celebrates the Chinese New Year. While attending, Miranda stumbles upon a body. The victim is identified as Eddie Takahashi. He was no good. The cops don’t really have an interest in the case and close it. Miranda is the only one, who is out to seek the truth about Eddie’s murder. Miranda better watch her back as the police may not be interested but someone is and they don’t like Miranda sticking her nose in places where it doesn’t belong.

City of Dragons is a really good book. I started this book right before bed, which was a bad idea as I couldn’t stop reading it. Miranda is a hard core, nose to the grind, blood hound, who doesn’t give up till the case is solved. There were plenty of twists and turns to keep the mystery fan in my happy. All of the characters that Miranda encountered were intriguing as well as engaging. You could tell how much research and hard work the author did on Chinatown and what the place looked like back in the forties. It was like I could see everything through Miranda’s eyes from…the vivid colors of the buildings to the smell of rotten beer and cigarettes. I only have one last comment to make and that is…I want more Kelli Stanley.
Kelli Stanley

Kaye said…
Ooh, this sounds like a great story. I love it when the author put you right in the scene and you can actually smell and hear the surroundings. Great review, Cheryl!
February 18, 2010 at 7:19 AM

Becky LeJeune said…
I definitely enjoyed this one as well. She has another book in another series called Nox Dormienda. From what I hear, both series are continuing.
February 18, 2010 at 8:28 AM