Hannah's Take: Believe You Can Make a Difference 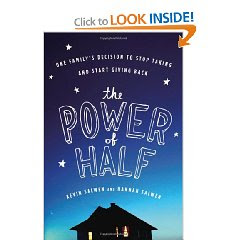 I want to thank Caitlin with FSB Associates for letting me post this article.
Please visit us at: www.fsbassociates.com & www.fsbmedia.com

Hannah's Take: Believe You Can Make a Difference
by Kevin and Hannah Salwen, Authors of The Power of Half: One Family's Decision to Stop Taking and Start Giving Back

About 111 women die of breast cancer every day in the United States. A million teenagers get pregnant each year. Someone dies every thirty-one minutes because of drunken drivers. I'm not writing this to bum you out. But you might be thinking, There are so many problems, there's no way that I or any one person could solve anything.

When civil-rights activist Rosa Parks refused to move to the back of a public bus in 1955, she never dreamed of the impact she would have on millions of lives. "I didn't have any idea just what my actions would bring about," she said years later. "At the time I was arrested I didn't know how the community would react." The reason Ms. Parks didn't get up is that she knew the racist laws were wrong.

Rosa Parks is just one of the thousands of influential people whose actions changed the views of many people today. Think about Gandhi, Mother Teresa, Greg Mortenson, John Woolman, Madame Curie (if you don't know them, check them out; they're all remarkable). Sometimes small acts significantly affect a large group of people. But even when they don't, they can have a big influence, maybe on just one individual.

So don't get discouraged because you can't solve a whole problem alone. As the British philosopher Edmund Burke said, "Nobody made a greater mistake than he who did nothing because he could only do a little." I know exactly what he was talking about. Before our family project I kept telling myself that no matter how hard I tried or how much money I gave, I would never be able to fully solve any of the world's big problems. When I worked at Café 458, the Atlanta restaurant for homeless men and women, I saw dozens of people come in looking depressed and lonely. But still I didn't see them as individuals, but instead as a group, "the homeless."

Then one day at Café 458 I heard two homeless men talking about a college basketball game that I had watched with my dad the night before. I snapped to the realization that these people are people. How stupid and rude I had been to see them as different from me. I realize now that having that epiphany was a big step for me. In that split second of comprehension, I switched from seeing them as a group of people to viewing them as individuals. When I started seeing people in need as individuals, the problem of homelessness and hunger seemed smaller and I felt like I could make more of a difference. I also started believing that I could help because the problem was on a personal level.

Think of a person from your community who inspires you. Look beyond his or her specific actions to the kind of qualities that person brings to work or volunteer activities. For example, some people are better at creating new programs than at actually putting them into action; other people are doers, ready to take someone else's ideas and run with them. Is that aunt in your family a problem-solver? A good listener? An inspirer?

Now think about your strengths in the same light. If you took your best characteristics out into the world, how could you use them to make a difference? Are you patient? Maybe you would be a good tutor. Are you musical? Maybe you could be playing the guitar at a nursing home (and bringing your family along to sing -- no talent required). We all have gifts the world can use.

The above is an excerpt from the book The Power of Half: One Family's Decision to Stop Taking and Start Giving Back by Kevin and Hannah Salwen. The above excerpt is a digitally scanned reproduction of text from print. Although this excerpt has been proofread, occasional errors may appear due to the scanning process. Please refer to the finished book for accuracy.

Copyright © 2010 Kevin and Hannah Salwen, authors of The Power of Half: One Family's Decision to Stop Taking and Start Giving Back

Hannah Salwen, coauthor of The Power of Half: One Family's Decision to Stop Taking and Start Giving Back, will be a junior at the Atlanta Girls' School, where she plays for the varsity volleyball team, and is her grade's representative to the student council. She has been volunteering consistently since the 5th grade at the Atlanta Community Food Bank and Cafe 458, among others.