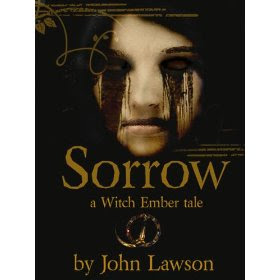 Archibishop Tuggub has been murdered by an assassin by the name of Sorrow. Lord Ash, an investigator has been called in to solve the murder of the archbishop. It won’t be easy as the case involves a lot of players. Lord Ash will need to keep his wits about him. The assassin Sorrow is a very skilled killer.

Phindol has been traveling a long time. All he wants to do is go home. Phindol comes upon some people who are willing to help Phindol get home. Phindol carries with him a dangerous weapon called Splintor. When the people Phindol is traveling with learn about this weapon, they will do anything to get their hands on it.

Sorrow is the third novel in the Witch Ember series. I have not read the prior two novels. Though from what I read, you do not have to read the first two books. I have to admit that it took me a while to get into this story. OK, so I don’t know if this will make sense but I has two issues with this book and it is kind of funny as they are complete opposites. The first is that there was so much going on at the beginning that I had a hard time trying to figure out who was who and what their part was in the story. The other issue was that once I got everything straight in my head, the story line moved slowly. Once I really started getting into this book, I found that I did like it. The characters were some what interesting. Mr. Lawson does spin a good story in Sorrow.
John Lawson