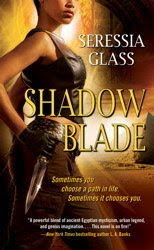 Kira Solomon is a Shadowchaser. She was born with great powers. Kira thought her gift was a curse; especially when her father took her to Santa Costa, home of Gilead and left her. As Kira grew up, she came to embrace her powers. Kira emanates magic from her body that if someone touches her, they will be killed instantly.

Kira’s mentor and good friend, Bernie Comstock has come back from a dig for ancient artifacts. He brought back with him a dagger known as the “Dagger of Kheferatum. This dagger is both special and dangerous. Whoever possesses the dagger gains special powers. Plus the dagger with one slice can kill anyone. The dagger’s true owner, Khefar wants the dagger back. Bernie gets killed by a demon. Kira thinks about getting rid of the dagger but it calls to her. Can Kira resist the dagger’s control?

Shadow Blade is the first to start of a new series by author, Seressia Glass. This is the first book I have read by this author. I liked the heroine, Kira. She could kick some demon butt. I liked that this book was more on the darker spectrum of the urban genre. This book started out a little slow but this quickly faded and the story picked up speed fast. I can’t wait to see what new challenges Kira faces in the next book.
Seressia Glass

The Bookworm said…
I'm picky with paranormals, but this one does sound good.
http://thebookworm07.blogspot.com/
February 26, 2010 at 7:41 AM