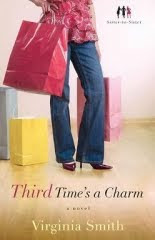 Tori Sanderson has been working none stop almost every day of the week. She is trying to get a promotion at work. There is just one problem...her co-worker; Mitch also wants the promotion, in addition to having his eye on Tori. Tori has a different love interest in mind. His name is Ryan.

As if Tori didn’t already have her hands full. When she and her sisters stumble upon a box of their father’s old stuff, Tori decides to find her father and ask him why he left them.

Third Time’s a Charm is the third and final book in the Sister-to-Sister trilogy about the Sanderson sisters. This book is Tori Sanderson’s story. I have not read the other two prior novels in this trilogy but I didn’t feel like I missed anything but not reading the other two first. I was a little turned off by Tori at first. She seemed stuck up to me. She was more worried about getting a promotion and buying the latest fashion than she was about her family. The chemistry between Tori and Ryan was slow to build up. Tori really started to show she had feelings when she started to seek out her father. I am interested in giving author, Virginia Smith another chance in the future.
Virginia Smith

Edna said…
Please enter me into the contest for Virginia's books.
Your blog is nice and I am a new follower

Linda Kish said…
Please enter me into this contest. I'd love to read these books.

Virginia Smith said…
Thanks for the review! I'm glad you ended up liking Tori, and that you'll give my future books a chance, too!
February 4, 2010 at 5:56 PM

Anonymous said…
if you're part of the KCWC big giveaway, i'd LOVE to be entered!
rebornbutterfly (at) sbcglobal (dot) net
February 5, 2010 at 10:19 PM

Unknown said…
This book sound like it would be a fun read.