He is...Sam the Night Person

February 22, 2010
I want to thank my good friend and fellow blogger, Nancy for doing a review of this book for me. 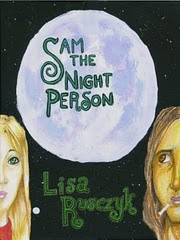 Azzy had come across the country to Colorado because she dreamed about Sam. She had a feeling he was there, at Barbara’s lodge and, although she had never met him this is the spot. She was sure of it. Renting a cabin was no problem, but finding Sam was. The manager didn’t know him and the term “night person” to Azzy was someone who worked nights and they had no night help. Azzy settles in for a wait.

She comes back from a hike the next day to find Sam in her living room, barefoot on the sofa, reading. Sam just appears and disappears and through it all, they take up their conversations as if there were never a stop. Sam is intrigued that Azzy daydreams about him, he thinks she is a seouli and doesn’t know it. A seouli is a night person who can understand and read other people.

What Azzy does not know is that Sam has been threatened by the father of a young girl who died and Galen (the father) felt Sam could have saved her. He was not far enough long in his powers at the time and Galen blames Sam for everything. He has now decided to kill Azzy instead as he can tell she means something to Sam

This novel had several interesting premises: there are Day people (us), Night people and Water people. All peacefully co-exist on several levels except for some of the Water people to which Galen belongs. Water people are able to track someone through water lines, tap water, showers, etc. and Galen uses every trick possible to find Azzy. Will he succeed?

A story with some interesting thoughts and the characters were well filled out. Somehow it just didn’t do it for me but certainly will for someone else and I encourage you to give it a try.