Watch out for Mangroves and Monsters 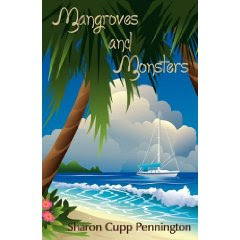 Charlie Cooper has never forgotten the love of his life. Her name is Angeline St. Cyr. She was hit by a car and died. There is just one problem…Angeline is not dead! Angeline isn’t fully surprised when Charlie tracks her down in the Caribbean on the tropical island of Jacqueme Dominique. She always knew that Charlie wouldn’t give up looking for her till he found her. What do you say to someone you thought was dead?

William Voorhees, an old arch nemesis has Charlie in his sights. He wants to destroy Charlie. One way he can really get to Charlie is by killing everyone he loves. If Charlie isn’t careful, he could find himself buried in the sand.

Mangroves and Monsters is the second book by Mrs. Cupp Pennington. Her first novel was Hoodoo Money. This book moved a little slow for me at first but luckily the story picked up quickly. I found Charlie to be a likable guy. I didn’t really feel the connection between him and Angeline. She seemed a little standoffish to me at first. This is why I couldn’t see what Charlie saw in Angeline. The location for this story was the best. Mrs. Cupp Pennington picks just the right setting for her stories to help set the mood. Like they say…location is everything. I thought it was kind of funny that the enemy shares the same last name as another famous character. Only this Voorhees doesn’t wear a hockey mask or carry a machete. This Voorhees though is just as ruthless. Author, Sharon Cupp Pennington can spin a good tale.
Sharon Cupp Pennington