Memoirs of an Imaginary Friend is an A+! 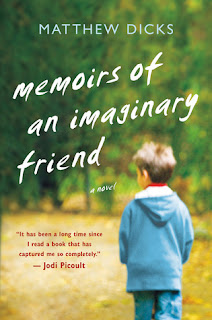 Reading this book made me feel like a child again. I loved Budo. I wished that I had such a vivid imagination as Max did with Budo when I was growing up. I never really had an imaginary friend growing up but this probably had to do with I had a younger sister to play with. She and I would make things up ourselves. However, if I was an only child, I would have wanted a friend like Budo. It was very creative of Max to give Budo the ability to walk through walls.


I do admit that at first I was a little leery as I was not sure where the story was going to lead and wondered how Mr. Dicks was going to put together a whole book about an imaginary person. I should not have worried. This book was an instant hit with me. I was hooked. Max and Budo stole the show. I have to agree with another reader that I did flash forward some in the book but not because I was bored but because I wanted to see what was going to happen next. I wanted to make that leap sooner. The ending was both good and sad. I won’t get into too much detail as I don’t want to give anything away. Memoirs of an Imaginary Friend is an A+!