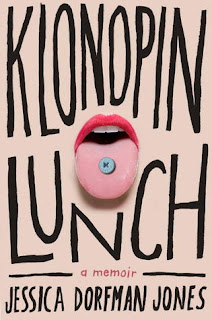 Klonopin Lunch is one of the most candid memoirs that I have read. I applaud and appreciate Jessica for sharing her story.Honesty, I did not expect to like this book but thought I would check it out anyways. Klonopin Lunch serves up a morsel of sex, drugs, self-discovery, and some laughs and tears along the way. While I found myself immersed by Jessica and her story at the same time, I did not feel a deep connection with her. It was kind of like reading a book on the do not's on how to find yourself.


Step one: Do not just throw away your job. Have a back up plan.

Step three: Play in a rock band if you get the chance.

Step four: Let loose and have fun. It is your life. Don't have regrets as each stumbling step will only make you stronger.

While, I did find Jessica's story intriguing, I do admit that at times, I did grow a little bored and skimmed parts to flash forward. Someone that really amazed me was Andrew. Jessican's ex-husband. He was either a saint or naive. He had to have known that Jessica was hooking up with Gideon, her instructor. I believe that Andrew was a saint. He knew about Jessica but in his heart, he wanted to say that he did try. Although, I can not fully applaud Jessica as what she did was selfess trying to find herself but not breaking up with Andrew first. I felt that she should have let him go. She knew way before she met Gideon that their relationship was over. Gideon was like a drug for Jessica but without him like Jessica states, she may have not had the courage to try new things and experience the world in a whole new light. Klonopin Lunch is a raw look into author, Jessica Dorfman Jones's life. She holds nothing back in this book.
Jessica Dorfman Jones