How about taking a Spin with me?

August 27, 2009
I want to thank Marnie for sending me a copy of this book to review. 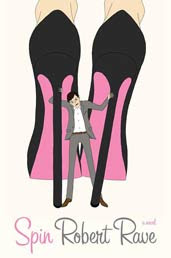 Taylor Green has lived a sheltered life. He is taken by surprise when he moves to the Big Apple and gets hired on as a Junior Account Executive at the notorious public relations company of Jennifer Weinstein. Jennifer is the biggest diva. She just may be bigger than the clients she represents. It isn’t long before Taylor gets swept up into the catty world of backstabbing, rumors, parties, and the all around kookiness that is the pr world of celebrities.

Spin is Mr. Rave's debut novel. Spin is a combination of Friends and Sex in the City. It had that witty humor that I love, in addition to fabulous clothes and lots of juicy gossip. There were times when it felt like the characters were having weird acid trip moments. Which they probably were as it is easy when you are famous or hang around famous people to have access to all kinds of stuff. Though those times made for some very interesting moments…like the time when Taylor came walking out of a woman’s bathroom stall in high heels. I did find some of the characters to be a little too much into themselves for me. Taylor seemed like a likeable guy but I wanted to see him emerge more and stand up for himself. He did do this towards the end. I hope in the next book that he is as big as a persona as Jennifer, even though Ms. Weinstein is a b*tch.
Robert Rave