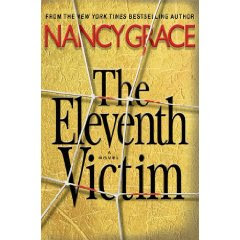 Criminal prosecutor Hailey Dean was brilliant. When neither the authorities or the citizens of Georgia at first would consider the fact that they had a serial killer on their hands, it was Hailey who helped point out the obvious. It was also her that put Clint Burrell Cruise away in prison. The day Cruise was sentenced was also the day Hailey quit her job and moved to New York to be a therapist. Hey there is only so much a woman can put up with…losing her fiancé and being strangled by a serial killer and almost dying in the process.

Hailey is just getting her life back together, when a blast from her past reappears. Cruise is out of prison and wants revenge. Hailey better watch it as this time she may not escape with her life.

Author Nancy Grace is the TV host of Nancy Grace, a legal analysis television program. She used to be a special prosecutor. The beginning of this book had my attention but about a third of the way in I had lost some interest and never got it back. While I liked Hailey and the fact that Ms. Grace was able to insert actual experience into her character and this story, it was the killer that seemed to be non-existence to me. Hailey was suppose to be fearful of Cruise but he mostly just stalked her and stayed to the shadows. The Eleventh Victim was not up to par by my standards. It needed more oomph! It did not leave me wanting more.
Nancy Grace