Do you have some Scottish in you. 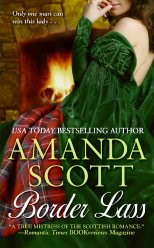 It is time to crown the new king of Scots. Amalie Murray was just going about her business when she overhears some men plotting to over throw the new king. Someone is very desperate to rule, Scotland and he will do anything to gain control even if it means taking anyone who stands in his way down. When Sir Garth Napier catches Amalie eavesdropping at the door, he briskly takes Amalie away. Garth demands to know what Amalie was doing spying. Amalie tells Garth that she was not spying but instead had heard some voices plotting and stopped to listen because one of the voices sounded familiar. Know that Amalie could be in trouble that would require his protection; Garth decides to keep a close eye on Amalie. Fortunately for Garth it won’t be hard as he is captivated by the lovely Amalie.

I adored Amalie. She was friendly but also had a strong will about her. Sir Garth Napier is very handsome, warm, and all-around great guy. The story within Border Lass was a great one. It had deceit, adventure as well as romance. Amanda Scott talks about her love for Scottish history and it shows in this book. Ms. Scott really did her research. As I was reading Border Lass I could instantly picture myself there with Amalie and Garth. Amanda Scott is true royalty when it comes to fourteenth century Scottish historical romance novels. So the next time I am in the mood to read a really wonderful Scottish novel I know I won’t have to look any farther then Amanda Scott.

Anonymous said…
When I was reading your review, I'm thinking that Naida would love this. And then I see she's already commented...lol!
August 27, 2008 at 5:34 PM