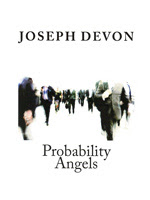 Matthew Huntington can not seem to catch a break. His mentor, Epp is displeased with Matthew. Epp thinks Matthew has been slacking off too long now and wants him to really get into the game. As if that was not bad enough, Matthew’s wife is lying in a pool of blood, dying in a park. Matthew can’t do anything as it just so happens that Matthew is an angel.

Probability Angels is one of those books that you are glad you picked it up and gave it a chance. I thought this book was unique and a nice change from all the vampires, werewolves, wizards and other creatures of the night. Though, if you are expecting a mushy story and weak characters than you will be in for a surprise. In fact, as I was reading this book, there were a few times that the movie; City of Angels would flash into my head.

What I most liked about this book was that Matthew was not your typical angel. He had a cynical attitude about him but at the same time it showed that he may be an angel but he is just a normal guy trying to do good for others. The second half of this book was a battle of good vs. evil. While I found it interesting, I sort of lost some interest. Overall, Mr. Devon deserves kudos for Probability Angels.
Joseph Devon