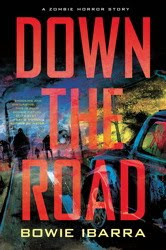 All George Zaragosa wants to do is get home safely to San Uvalda. The world around him has gone mad. A deadly plague has turned most of the human population into flesh eating zombies.

George has two choices…he could either sit in his apartment as he does have enough food to last him for at least three weeks or he can make an attempt to go down the road to San Uvalda. George decides to risk it and travel home. It will be a dangerous trek. One that George will by lucky to survive.

I recently became obsessed with reading zombie books. When I first start reading books in this genre, I could not get enough. Lately, I have been reading some duds. I was starting to re-think, if I had made a mistake and needed to take a break from the genre. This all changed when I read…Down the Road by Mr. Ibarra. What I liked about this book is that the zombies were what you would imagine zombies to be and act like. They were not modified versions. I was rooting for George the whole time. The ending was a surprise. I plan to check out more books by Mr. Ibarra…Down the Road.
Bowie Ibarra