Be warned…Kiss at Your Own Risk is addicting, hilarious, and will have you craving more! 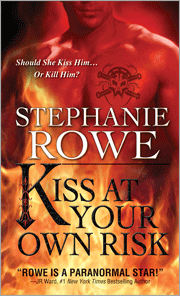 Blaine Underhill has been Angelica, the Black Witch’s prisoner for one hundred and fifty years. There is only so much womanly domination that Blaine can take. I mean Angelica has forced Blaine and his friends to take on women tasks. This is her way of taming the men. Blaine and his friends have been plotting to escape for a long time. They will only get one chance at trying to gain their freedom again. Almost everyone escapes. Blaine’s friend, Christian is left behind. Blaine vows to find a way to rescue him from the black witch.
Trinity Harpswell is the Black Widow, a deadly assassin. Trinity is ready to hang it all up. All Trinity has to do is just keep from killing anyone for at least one more week. If she can do this than she will be free.

When Blaine enters into Trinity’s life and asks for her help. Trinity will have to choose between helping Blaine or her freedom.

I have never read anything by Stephanie Rowe until now. I have to say that now that I have discovered Mrs. Rowe, I will be checking out her prior novels. Kiss at Your Own Risk is book one in the Soulfire series. It is actually very endearing to find a macho man like Blaine who is not afraid to admit that he likes to cross stitch. Though don’t get the wrong impression about Blaine as he also has your back and he is smoking hot. Trinity evenly matches Blaine move for move. She and Blaine are a perfect match together. There is plenty of action and romance for everyone. Be warned…Kiss at Your Own Risk is addicting, hilarious, and will have you craving more!
Stephanie Rowe