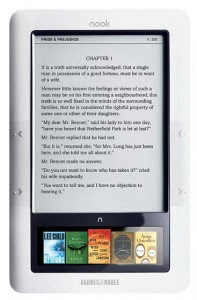 The rumor mill is spinning regarding Barnes & Noble's Nook 3G e-reader. Based on "hard evidence from within B&N," Engadget reported the device "is being discontinued, with sales to seemingly continue until stock is exhausted," and noted the company "is encouraging retail partners to not send out any bulk orders for the Nook 3G, as there simply won't be sufficient quantities to fulfill those orders."

While such a move would reduce B&N's Nook line to two models--the Nook Wi-FI and the Nook Color--PC magazine wrote that the "news comes just after Barnes & Noble announced it has sold 650,000 subscriptions on the Nook Newsstand, and an earlier boast that the Nook (all models) is the company's best-selling product ever. If the Engadget report is true, presumably both developments were due to the Nook Color, announced in October."

A B&N spokesperson wouldn't comment on Engadget's claim, but told PC magazine "3G sold out during the holiday season so there is plenty of demand for it."

Electronista suggested that the Nook 3G "may also have been the victim of the e-reader's increasing role as a secondary reader. Many iPad owners have e-readers as well, and many buying competing readers like the Kindle have now skewed either towards the cheaper Wi-Fi models or else towards color readers and tablets."

Cnet News offered a conservative response, pointing out that "it would seem odd for Barnes & Noble to discontinue the 3G/Wi-Fi version of the Nook and tell customers they could only get the Wi-Fi-only version. The fact is, Amazon offers both a 3G/Wi-Fi Kindle and Wi-Fi-only Kindle, and Barnes & Noble would most likely continue to offer models that compete with what Amazon's got."

Chiseled in Rock said…
Interesting that many Ipad owners have e readers as well. When shopping for e readers, I first looked at the I pad and was shocked at the price. I found the Kindle to be much more reasonable.