Easy as Pie at Bobby's Diner 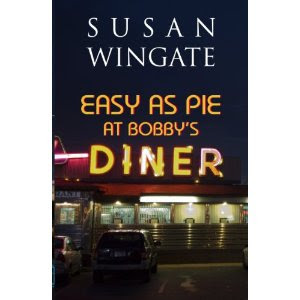 Since the death of her husband, Bobby five years ago, Georgette has been running Bobby’s Diner by herself. It was rough at first between Georgette and Bobby’s grown daughter, Roberta but as the years passed, they became close.

Georgette has found herself a new man. His name is Hawthorne Biggs. He is dashing and in love with Georgette. Georgette’s good friend, Helen returns. Helen and Hawthorne do not get along very well. Helen suspects something is not quite right with Hawthorne. Before Helen can find out if she is right, she disappears. Now it is up to Georgette and Roberts to uncover the truth, even if it hurts.

Easy as Pie at Bobby’s Diner is the second book to Bobby’s Diner. I did not read Bobby’s Diner. Though I had no issues jumping right into this book. I liked Georgette. I thought she was nice but I do admit that she did get on my nerves at first. She was almost too nice that she let people take advantage of her. Though, once you pissed Georgette off, you had better watch yourself. Georgette did have a backbone. This was a nice surprise. Readers will probably figure out who the killer is before the end of the book but you will still want to finish reading until the very end. Overall, I thought this was a fine book. I would visit Bobby’s Diner again in the future.
Susan Wingate