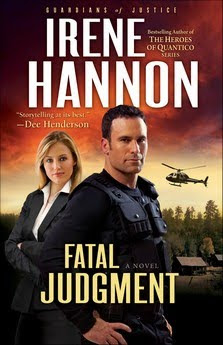 Being a U.S. Marshal, Jake Taylor should be used to the lack of downtime but that does not mean that he has to like it. Jake is barely off the airplane, when his phone rings. It is his boss. He wants Jake to watch over Federal Judge, Elizabeth Michaels. Someone has shot Liz’s sister. Jake reluctantly accepts the job. Jake has ill feelings towards Liz. She was married to his best friend Doug until he took his own life. Jake blames Liz for Doug’s death. When Jake learns the real truth about Liz and Doug, will Jake’s feelings towards Liz change?

Fatal Judgment is book one in the Guardians of Justice series. A new series from author, Irene Hannon. I have read a few prior novels from this author and liked them. Just like the others, I know that I can expect a quick paced story line, plenty of drama, action and some romance thrown into the mix. Though, I did like this book, I never fully committed to the characters. I don’t know if it was because I was suppose to believe Jake didn’t like Liz but than it was hard to get this feeling when from the first moment he saw her, he felt something for her. Overall, I do think that Fatal Judgment is a good start to this series.


Irene Hannon is the author of more than 25 novels, including the CBA bestsellers Against All Odds, An Eye for an Eye, and In Harm's Way. Her books have been honored with the coveted RITA Award from Romance Writers of America, the HOLT Medallion, the Daphne du Maurier award, and the Reviewer's Choice Award from Romantic Times BOOKreviews magazine. She lives in Missouri.
http://www.irenehannon.com/


"Available January 2011 at your favorite bookseller from Revell, a division of Baker Publishing Group.”
Irene Hannon

Irene Hannon said…
Hi, Cheryl! Thanks for reviewing my latest book. Glad you found it an entertaining read.
January 30, 2011 at 3:22 PM