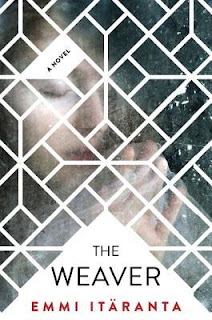 Eliana is a model citizen of the island, a weaver in the prestigious House of Webs. She also harbors a dangerous secret—she can dream, an ability forbidden by the island’s elusive council of elders. No one talks about the dreamers, the undesirables ostracized from society.

But the web of protection Eliana has woven around herself begins to unravel when a young girl is found lying unconscious in a pool of blood on the stones outside the house. Robbed of speech by her attackers, the only clue to her identity is one word tattooed in invisible ink across her palm: Eliana. Why does this mysterious girl bear her name? What links her to the weaver—and how can she hold Eliana’s fate in her hand?

As Eliana finds herself growing closer to this injured girl she is bound to in ways she doesn’t understand, the enchanting lies of the island begin to crumble, revealing a deep and ancient corruption. Joining a band of brave rebels determined to expose the island’s dark secrets, Eliana becomes a target of ruthless forces determined to destroy her. To save herself and those she loves, she must call on the power within her she thought was her greatest weakness: her dreams.

Reading is such a powerful tool to have. The concept of this story really got me excited. I picked it up ready to settle in for a good read. The beginning did start out good. Yet, it quickly became apparent to me that my joy was disappearing fast. The story moved slowly without a lot of details about the world that Eliana existed in or why her talents were so precious. In fact, after reading about a third of the way I put the book down for good. Yet, despite my lack of joy, I decided to come back to this book and give it a second chance. Only, this time I picked up the book and opened it to a random spot a little past the middle of the story and began to start reading. What I read then had me intrigued. Details about the world were more apparent. However, I still could not capture that emotional connection towards Eliana or anyone else in the story. I can see where the author was going with this book and I applaud the author but I needed that character connection, more details, and intensity earlier on. Sadly, this book was not for me (this time).
Emmi Itäranta