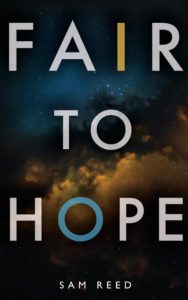 Velma had lived two lives: her first as a former foster kid, and her second as an unlikely recruit into a secret order that satisfied her need for retribution. Her fifteen-year-old self had given up on hope, but after three years with the Taram, she’d found her life’s purpose.
That is, until she is surprisingly named Kachina, the fabled chosen empowered to fight the last battle for the fate of the world. Having to kill someone she loves was never part of the bargain, even if it means saving everyone else from damnation.
Building a normal life free from the pull of the Taram—seems like the only answer to her prayers. Except her best friend, the other Kachina, is coming. The legend is clear that one of them must die.
Velma will have to weigh the cost of her life against a world that’s constantly betrayed her and quite literally decide if she’ll be damned in dying, taking the whole world with her.

This book held a lot of promise to me. In fact, I was intrigued in the beginning. Although, I do agree with other readers that the story did seem to start in the middle versus the beginning. Right away, before really getting to know Velma, she was named Kachina. Which for a while there was not a lot known to me about just how important the role of Kachina is. This is because not a lot of details were given. Additionally, the story seemed to jump around a lot, so it was hard to follow. Kind of like the movie with Tom Hanks and Hallie Berry called Cloud Atlas. If you have ever watched this movie you know what I mean. I have watched it twice and each time I still seem to pick up on things that I did not see the last time. This is because the plot moves around a lot with tons of characters and just as you are starting to find the groove, the story jumps again either in the past or the present. If this plot had been grounded a little more with stronger voices for the characters and action then my thoughts about this book would have been different. For a short book it was long. 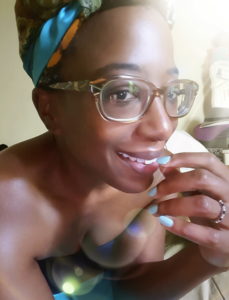 Sam Reed is a born and bred southern girl who grew up reading Toni Morrison, Archie Comics, Christopher Pike, Octavia Butler, Dean Koontz, and Stephen King. When she’s not thinking of what to write, she is napping or eating, going to church, wishing she could sing, trying to perfect her Grandma’s biscuit recipe, watching A Different World reruns, sitting in the sun—or reading a book.

Book Excerpt:
It had been twenty-three days. I wrapped and rewrapped the bandage around my waist, praying my ribs were bruised not broken. I bought more ramen in packs of ten and camped out in the motel, eating the chicken-flavored noodles for breakfast, lunch, and dinner. I tried to sleep, but he was always in my dreams. Once I closed my eyes, thoughts of him came roaring back like waves before a storm.
Bribed by the brightness of day I could almost remember us as a fairy tale, detach myself like it was someone else he’d sat next to that first day eating an ice cream cone and an apple, telling me I was beautiful. That we were “forever.”
At least it wasn’t just me. He’d had Nita fooled, too. She’d watched the two of us after quarantine training, sitting to hear from the elders, eating lunch outside in the sunshine, whispering secrets, laughing, trusting—she would have warned me if she’d known. She was the only person left to trust.
It was easier to think about Nita, even though I waited every day for her to come, to find me and drag me back. At night the sound of cars, people in the hallway fumbling with their motel keycards, the muted tumble of the ice machine all bruised the air like an omen. I kept the shades closed and the volume on the TV low. I made mental checklists of the redeemable points: I was alive, there was still money left, still noodles in colorful wrappers stacked next to the TV, the air conditioner worked today. That was okay until I blinked and saw his face, until the memory of his smile pushed against any safe space I tried to build, then the tears found room all over again.
I would not cry. I would do something. Figure something out. I’d make a plan, and it would have to be soon, very soon. It had been twenty-three days. My connection to the others was still too strong.
Nita would be coming.