Just Try To Stop Me 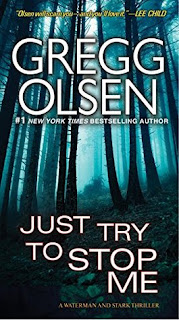 Seduction. Mind control. Murder. These are the weapons that have made Brenda Nevins one of the most wanted—and feared—criminals in the world. Now the notorious serial killer has escaped from prison and is plotting her revenge. Using innocent young women as bait, she will lure her unsuspecting victims into her trap. This time, sheriff’s detective Kendall Stark and forensic pathologist Birdy Waterman won’t be able to stop her. The killing will be filmed. The feed will be live. And the blood will be streaming . . .

This series is going in the right direction for me. The prior novel I read featuring Birdy and Kendall and serial killer Brenda was "just alright". I had found Brenda to be the only strong character in the book. Yet, this time, Brenda was not the only one. Both Kendall and Birdy were as strong. Birdy may come off as more of the quiet one but she really came through when it counted the most.
Brenda is one evil bitch. She kind of had a hint of another famous serial killer that I love and adore from Chelsea Cain's series named Gretchen. What makes Brenda so captivating and intriguing is her narcissistic self obsession with being famous. There was one hand where I wanted Kendall and Birdy to stop Brenda but on the other hand I didn't want them to catch Brenda. I wanted to see just how far she really would go. I can't wait to read the next book.
Gregg Olsen

GranthamLynn said…
Sounds good. I want to read this one!
I am having a special party beginning Thanksgiving Day and through the weekend.
You can post your suggestions of Books for Christmas gifts. Or just repost a review or spotlight.
This is a great way to showcase your favorites from the books you reviewed this year.
I hope you’ll join me! It will be ‘live’ here at Noon. http://ourholidayjourney.blogspot.com/
Happy Thanksgiving. Happy Reading.