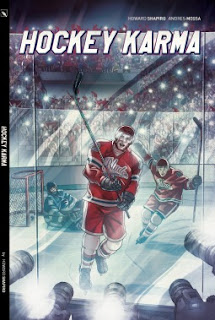 The highly anticipated sequel to the award winning “The Hockey Saint” taking place ten years after “Saint” ends. The legendary Jeremiah “Jake” Jacobson, now thirty two, has been the world’s best hockey player over his fourteen year career because of his out of this world talent level and his smart play. But he can’t stay on top forever, and when he starts making mistakes on the ice, his career and family life start to crumble.

At the same time, Tom Leonard, his agent and best friend, is completely overwhelmed by a project that he and Jake were supposed to be working on together. A project that could have a huge impact on people throughout their city in need of a helping hand. As Jake sinks deeper into a funk over his lost status due to his deteriorating play and the emergence of teammate and rookie phenom Barclay Pedersen, Tom realizes he’s on his own. At the same time he rediscovers someone from his past who he never thought he’d see again. In that burgeoning relationship, Tom discovers the importance of taking chances and starts to believe in himself.

Can Jake break out of his downward spiral and Tom finally find the courage to step out of Jake’s shadow?

I am a hockey fan. Yet, this is the first time I have heard about these books. I have read many hockey books but not a graphic novel one. The graphics in this book were great. They really did help to make the story come alive. They were done nicely without being overworked with too many details.

What I enjoyed the most about this book is that this was not just a book about a hockey player but that there were actual scenes featuring hockey players playing the game. In addition, the commentators were accurate in regards to reporting on the game. Another, aspect of this book that I appreciated was the fact that the hockey coach, Emma Schell, was a female. I know how male dominated this sport is, yet more female are breaking the barriers down and showing that women can be great coaches as well. Having not reading the prior novels I had not established that relationship with Jake and Tom so I was not as invested in their lives as I would have been if I had that established relationship. However, the lesson of this book showcasing the struggles that Jake had to overcome from bring the star player to a third lineman was good.