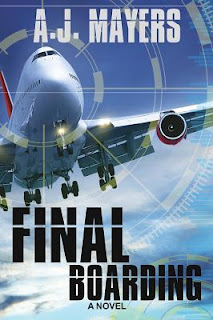 Patrick Baldwin had no idea missing Phoenix Airlines Flight 619 would mean he would live to see another day. The flight he missed went missing itself over the Pacific Ocean, going off radar without a trace or any sign of debris. When the world can't stop talking about the disappearance, Patrick begins to delve into the mystery of the missing airliner in hopes of discovering its fate and the fate of his three colleagues who were on board. The deeper he finds himself in this mystery, the stranger the circumstances become. Was Flight 619's disappearance an accident, or something more sinister?

This is one of those books where you need to run not walk to pick up a copy. It is amazing. I was instantly hooked from the beginning. I literally would have to make myself stop reading after my breaks were over at work. On this note: "Don't take this book with you to work as it could cause you to stop working"!

This book reads as if it was ripped from the headlines. This story is a take off the real missing airline, Malaysian Airlines flight MH370 that disappeared in 2014. Thus, the reason that I was thoroughly enjoying this book. It read as if it was nonfiction. Based on the fact that there still unanswered questions as to what really happened to flight MH370, is why the concept of this story is not that far-fetched. All of the characters in this story brought something to the story. There was not one person that was dead weight. I am booking my ticket to the next book by Mr. Mayers. One of the best books of 2016!
A.J. Mayers