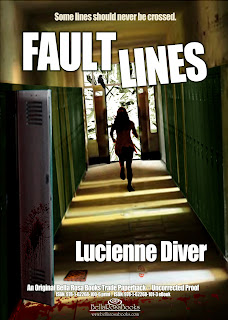 Description of Faultlines:
Six months ago Vanessa Raines lost her best friend. Lisa changed, pushing everyone close to her away, even Vanessa. She quit soccer, and started wearing clothes that favored the dark and dismal.  Now she’s really gone, suicide they claim, but Vanessa knows that isn't right.  It can't be.  She blames herself for letting Lisa chase her off, leaving her to face whatever she was going through alone.  She wants answers. She owes Lisa that much. But Lisa left no note and the journal she was always scribbling in which might tell all, is mysteriously missing.
As Vanessa struggles to come to terms with the loss of her friend and to reconstruct the last months of her friend’s life, someone calling themselves ‘Poetic Justice’, begins taking revenge against those he or she perceives drove Lisa to suicide.  Everyone at school thinks Vanessa is the mysterious ‘Poetic Justice’. She’s easy to blame and the former best friend.  Struggling with her own guilt, she is determined to ignore the bumps in the hallway and the snide remarks. But as the vengeance takes a darker turn, retaliation against Vanessa begins to escalate, from cyber bullying to violence, putting both her and the little sister she adores in the line of fire.  To protect them both, she has to find out who’s behind the attacks before things turn deadly.  And hope she can survive the truth.

My feelings towards this book was just alright. Let me explain why: First off, in the beginning I knew nothing about Lisa; therefore her death did not have a great impact on me. Although, I did experience the bond that Lisa and Vanessa shared. Due to the reaction that Vanessa had towards Lisa's death. The second factor is that all of the other classmates it seemed did not share that great a love to Lisa. Again, due to this factor, Vanessa trying to advocate for Lisa felt like a one man band. The third thing is that the story did seem to be lopsided with Vanessa against everyone else. Why was everyone including the Principal so easily ready to believe that Vanessa could do the mean things that happened to her classmates. This frustrated me as I wanted someone else to stand up for Vanessa. Yes, Vanessa's mother did but it was like she was in denial in the way that she tried to cope with the situations.

It was not until about the half way mark before I got a glimpse as to the events leading up to Lisa's death. This is too long into the story to start this as many readers unless they are hooked right away do not want to wait this long before the story starts coming together. Due to violence in this book, I would recommend it for the older teen audience.