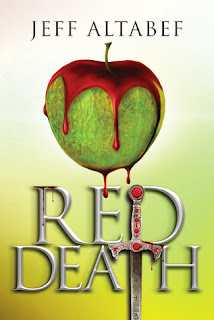 What happens when everything you believed turns out to be a lie?

Every child of Eden fears the Red Death. All those afflicted with the plague die young, their souls stripped away as punishment for ancient sins long forgotten. For centuries, Guardians have protected Eden from the Red Death by killing outsiders who stray too close.

Seventeen-year-old Aaliss is a highly-trained Guardian, but when her rather odd thirteen-year-old brother, Wilky, discovers a cure to the plague, her world turns upside down. Branded as traitors by the corrupt High Priest, Aaliss and Wilky are forced to seek refuge in the last place Aaliss thought she'd ever go—beyond the boundaries of Eden and into the land of the Soulless. Here they must navigate a medieval world filled with witches, magic, and warrior kingdoms run by Elders only a few years older than her.

Aaliss yearns to return home, but when her heart tugs her deeper into the world of the Soulless, she questions everything she once believed. Has her soul been taken? Will she and Wilky fall victim to the Red Death, or might they die sooner in the center of a battle that threatens to tear apart the Soulless world? Or... might Aaliss finally find, against all odds, what her heart has yearned for all along?

Despite not being fully committed in the beginning, I still found this to be an enjoyable read. I like the world that the author built. Very dystopian. This is important for readers who are a fan of this type of genre. Which I am a fan. The world plays a very important part in these books.
Aaliss is a good, strong female heroine. Her brother, Wilky brought a nice element to the story. He had this innocence about him that was refreshing. This was great because the story as a whole and the most of the other characters are dark. Wilky is the light. Yet, I do agree with another reader's comment that there were a lot of characters introduced to me in the beginning and it was hard to keep them all straight. The short chapters also did not help as I the reader would barely get to know one of the characters and then the next chapter would be a different voice. A good book overall with a nice tie into the next as the world and characters have all been set now in this first book.
Jeff Altabef