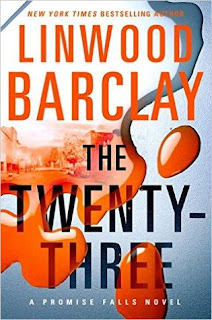 Everything has been leading to this.

It’s the Saturday of Memorial Day weekend, May 23rd, and the small town of Promise Falls, New York, has found itself in the midst of a full-blown catastrophe. Hundreds of people are going to the hospital with similar flu-like symptoms—and dozens have died. Investigators quickly zero in on the water supply. But the question for many, including private investigator Cal Weaver, remains: Who would benefit from a mass poisoning of this town?

Meanwhile, Detective Barry Duckworth is faced with another problem. A college student has been murdered, and he’s seen the killer’s handiwork before—in the unsolved homicides of two other women in town. Suddenly, all the strange things that have happened in the last month start to add up…

Bloody mannequins found in car “23” of an abandoned Ferris wheel…a fiery, out-of-control bus with “23” on the back, that same number on the hoodie of a man accused of assault…

The motive for harming the people of Promise Falls points to the number 23—and working out why will bring Duckworth closer to death than he’s ever been before.

Another home run for Mr. Barclay! From the first page all the way until the last page, I am hooked. The problem with reading a book from Mr. Barclay is that I read them way too fast. Then I have to wait a long time until the next book.

While this book is the third in this trilogy, it can be read as a stand alone novel. How do you know when you are in for a good story...when the book starts out with the following line
"I know I won't be able to get them all. But I hope I'll be able to get enough".

There was never a dull moment to be had while reading this book. There were two storylines happening but neither one over shadowed the other one. In fact, they both wrapped up nicely in the end. I am disappointed that I am doing the waiting game for the next book. This book will leave you sitting on the edge of your seat.
Linwood Barclay